Conclusion: Why our Work Must Go On

‘Historical Materials are a Legacy of 1,000 Years’

In 2011, the collection of ‘The Keichō Mission to Europe’ held in the Sendai Municipal Museum was recommended together with the ‘Midō Kampaku Diary’ for inclusion amongst the UNESCO World Memory Heritage. The ‘Midō Kampaku Diary’ was written by an aristocrat in the Kyōto court, Fujiwara-no-Michinaga, and covers the years 998 to 1021A.D. ‘The Keichō Mission to Europe,’ under the leadership of HasekuraTsunenaga, was dispatched by the 1st daimyō {lord} of Sendai, Date Masamune, in 1613, to negotiate with the King of Spain and the Pope in Rome to open direct trade between Sendai and Mexico. The delegation arrived back in Japan in 1620, their mission failed, and to find Japan in the middle of a bloody Christian suppression.
Historical documents and materials which have been passed on for 1,000 years become part of the legacy of all of humanity.

The Importance of Documents from ‘My Home town’（故郷 ふるさと）
Recording the ‘History of My Home Town’
The records of the Keichō Mission to Europe led by Hasukura Tsunenaga  and the diary of Fujiwara-no-Michinaga are recognised as part of the historical legacy of the world, but most of the documents and materials which we at Miyagi Shiryō Net have worked to record and preserve have been passed down in local families and townships. These unique materials are not widely known nor famous but they provide us with information about the history of these families and localities which can only be found in these documents.
These materials can tell us about how our predecessors and ancestors lived, what made them happy and what made them sad, and how they recovered from the natural disasters of their day. If a family or a locality loses these unique records of their past, we will never be able to reconstruct their history again
In the disaster of March 2011, innumerable historical materials recording the history of ‘my home town’ have been damaged, and are in danger of being lost. If this happens, the history of ‘my town’ in numerous localities across Tōhoku will be lost forever, and we will lose the chance to pass on this historical legacy to generations 1,000 years from now.
We are fighting ‘today’ to save the historical legacies of numerous ‘my home towns’ within Miyagi Prefecture, so that we can pass these on as ‘historical legacies of 1,000 years’ to future generations. At the same time, in order to help others prepare to preserve the historical legacies of their hometowns elsewhere from natural disasters, we are also working to pass on the experience that we have gained in our struggle to preserve the historical legacy of Miyagi Prefecture.


We cannot do this alone, and we ask you for your support in this endeavour.

An On-going Task
Salvaging documents is only the beginning of a long process. Nor does this process end with completing the following tasks of emergency preservation treatment and digital recording of the documents. Many of them require large-scale professional restoration, and we have yet to even start to solve the problem of how to ensure long term safe storage for the enormous number of documents entrusted to us for safe-keeping.
Another task we face is the job of deciphering and analysing the information hidden inside the wealth of documents that we have collected. One important project we have just embarked upon is to write a series of booklets using these documents to provide communities in the process of rebuilding/reconstruction,  and people who have been forced by circumstances to abandon their old homes and communities, with a written record of their ancestors' history as a way of giving these people a tool to rediscover their own identity.
This project involves bringing together private owners of collections of documents, other local residents, local government and outside specialists in a process of discovering what the history of each 'home town' and the documents etc which contain the record of this can tell us about new ways of envisioning ourselves today, by knowing who we all were yesterday. 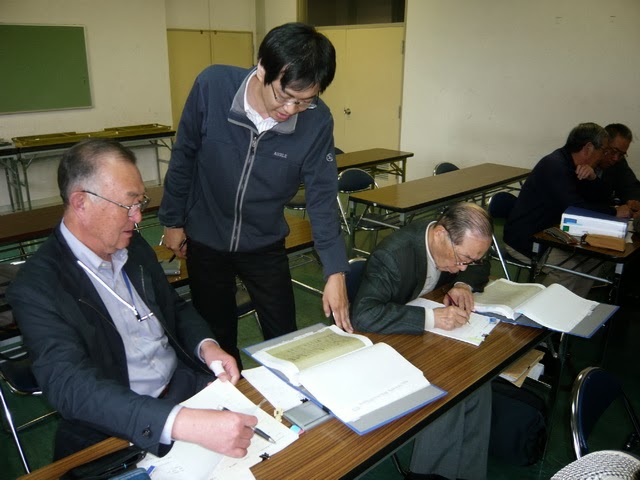 Volunteers from the city of Shiroishi, Miyagi Prefecture, working to produce a catalogue of documents from their city and which they had helped to sort and preserve (November, 2012). 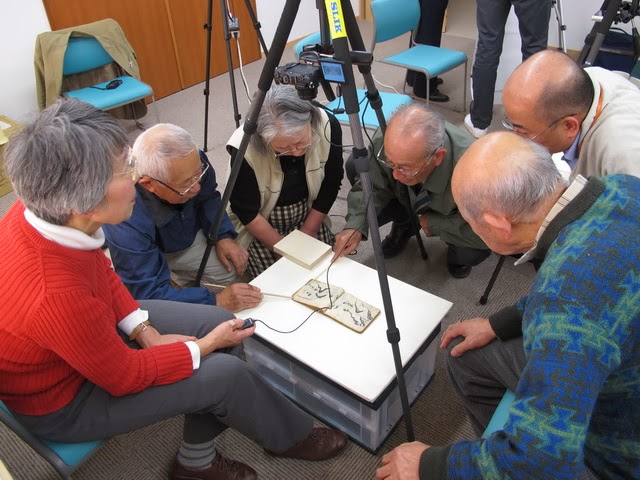 A special class in how to photographically record historical documents held in the town of Takahata, Yamagata Prefecture (November, 2013). Sharing our knowledge on how to preserve and record local documents with local people enables them to preserve their historical heritage by themselves. 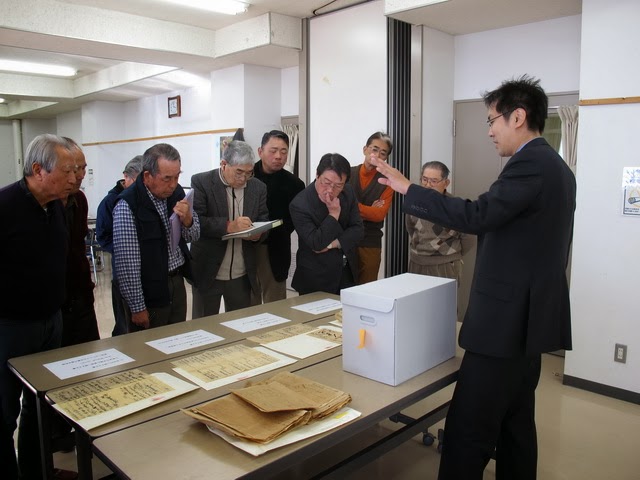 A public lecture held in Sendai to report on the contents of salvaged documents (December, 2013). We hold public lectures like this to share what we have learnt with the general public, and to use these new discoveries to rewrite what we know about the history of the region.