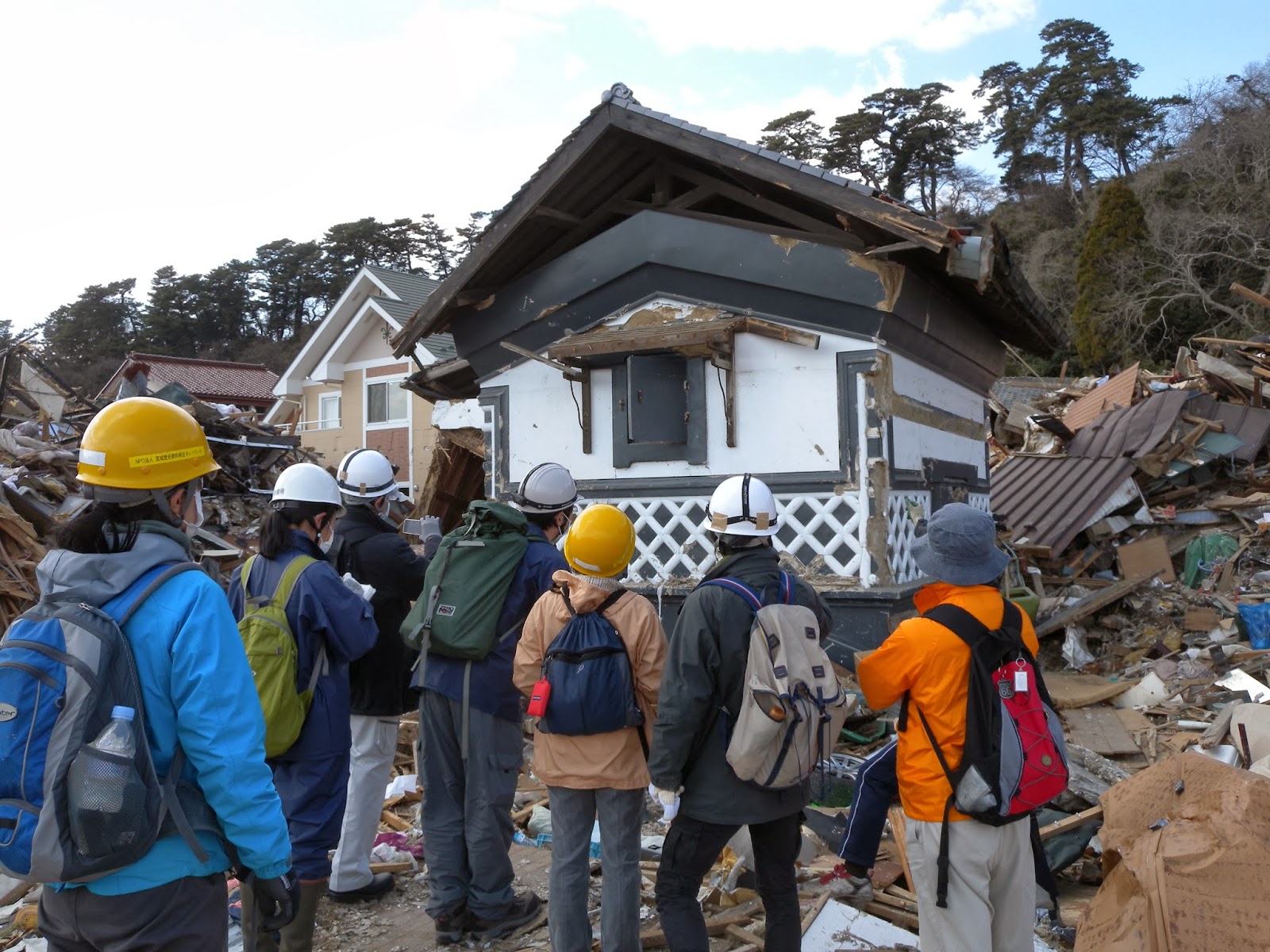 Our architectural team preparing to start their assesment of the Honma Family warehouse, Ishinomaki (12th April, 2011). 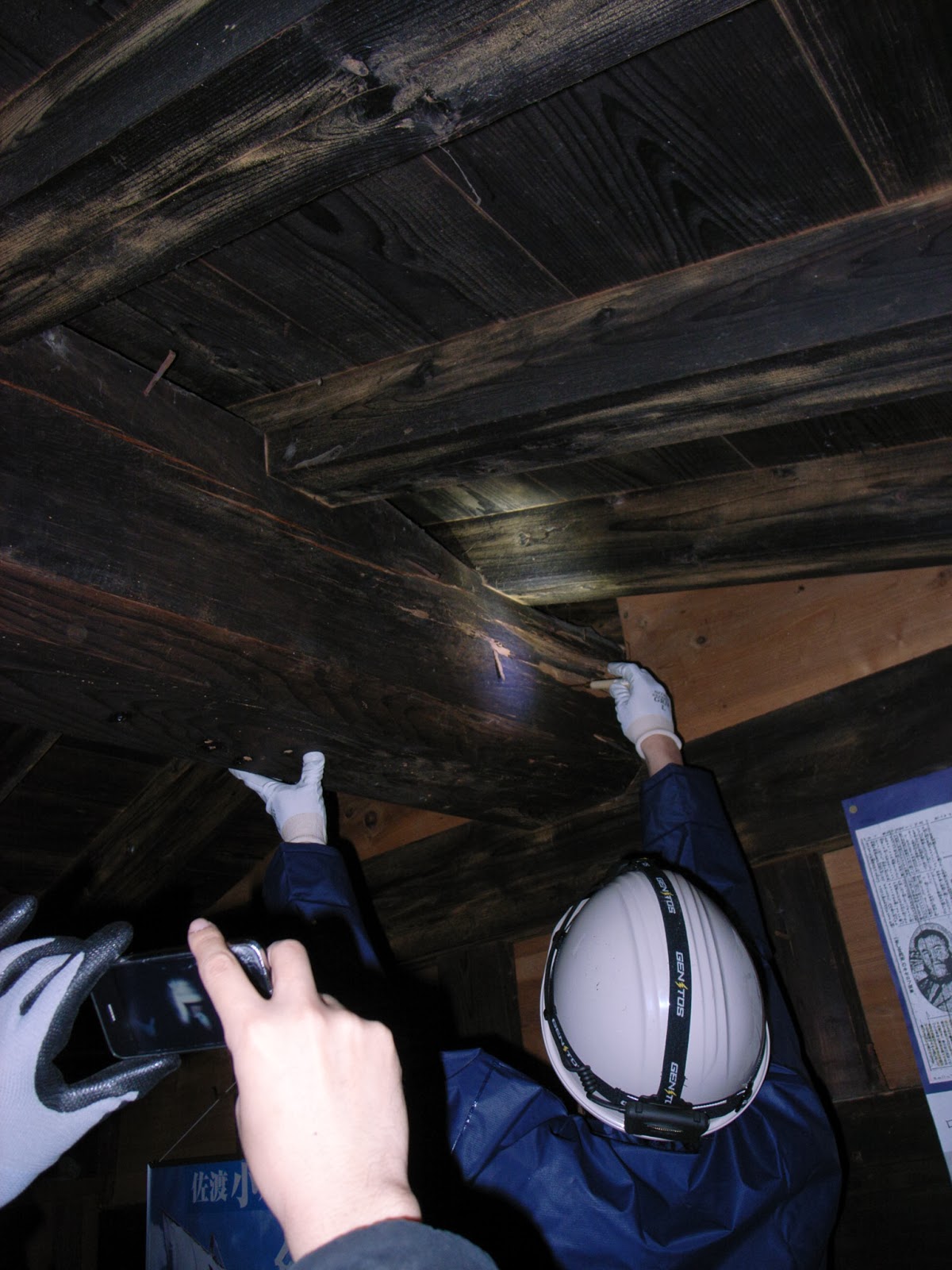 Using an awl to ascertain the internal condition of pillars inside the Honma warehouse. We discovered that the pillars had suffered very little damage (12th April, 2011). 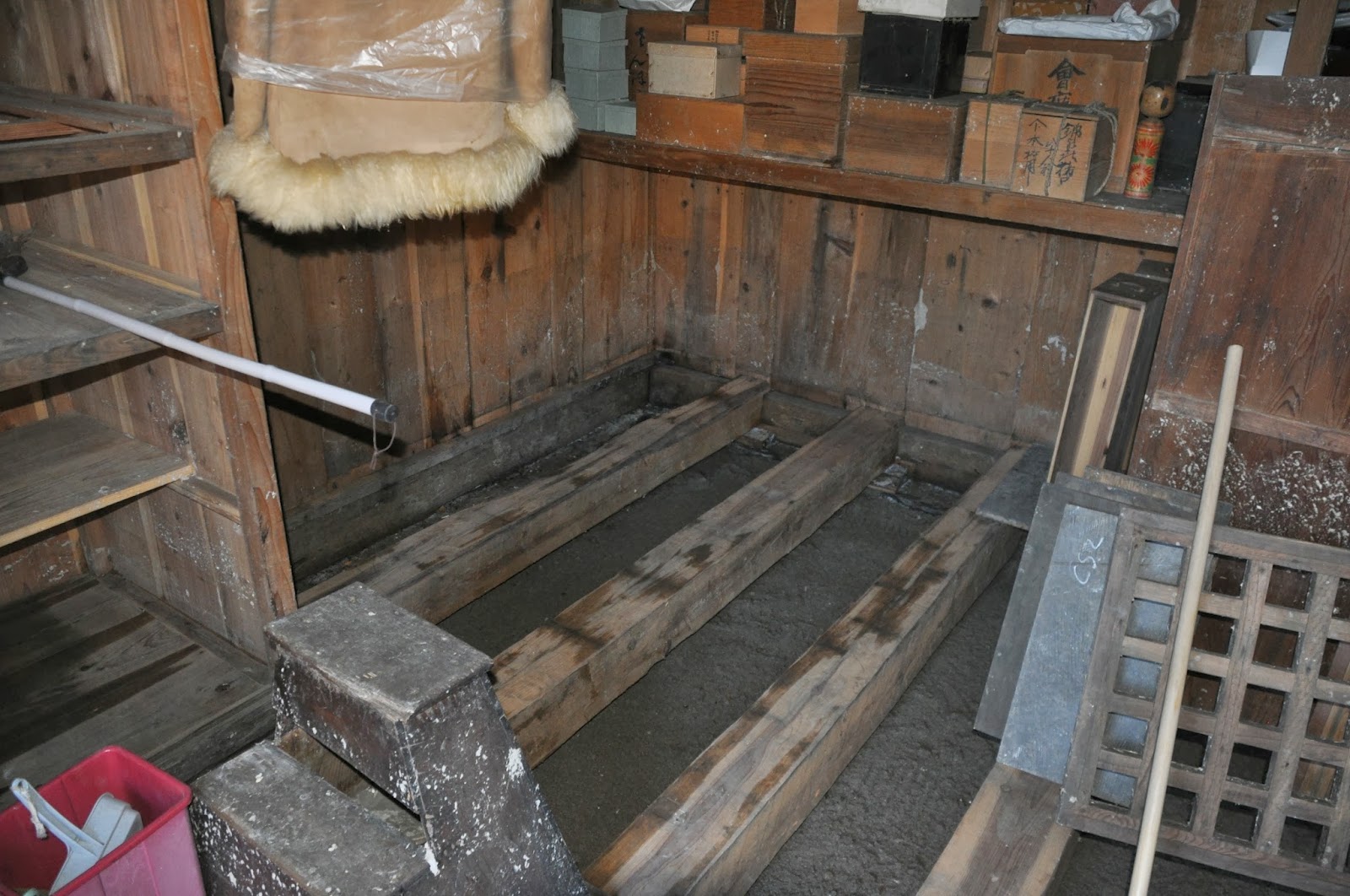 We removed the floorboards inside the warehouse to dry it out. After our architectural team issued their report and carried out emergency repairs to the warehouse, the ground was laid for starting to work for its preservation(15th April, 2011). 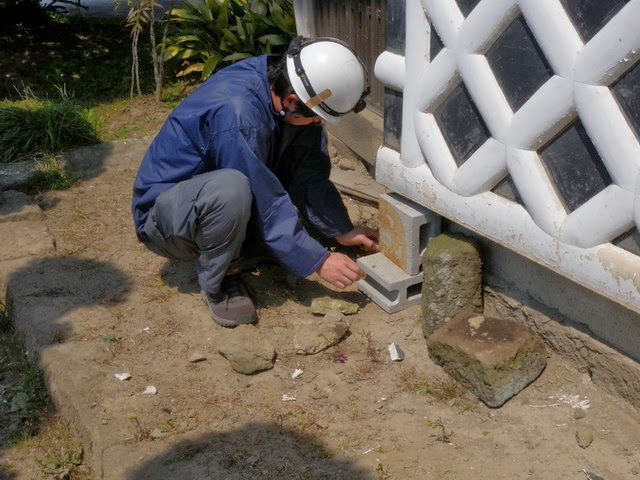 Carrying out emergency repairs to a stucco-walled warehouse in Iwanuma, Miyagi. Our team used concrete  and old stone blocks to  provide a temporary support for the wall and stop from disintegrating under its own weight (14th April, 2011). 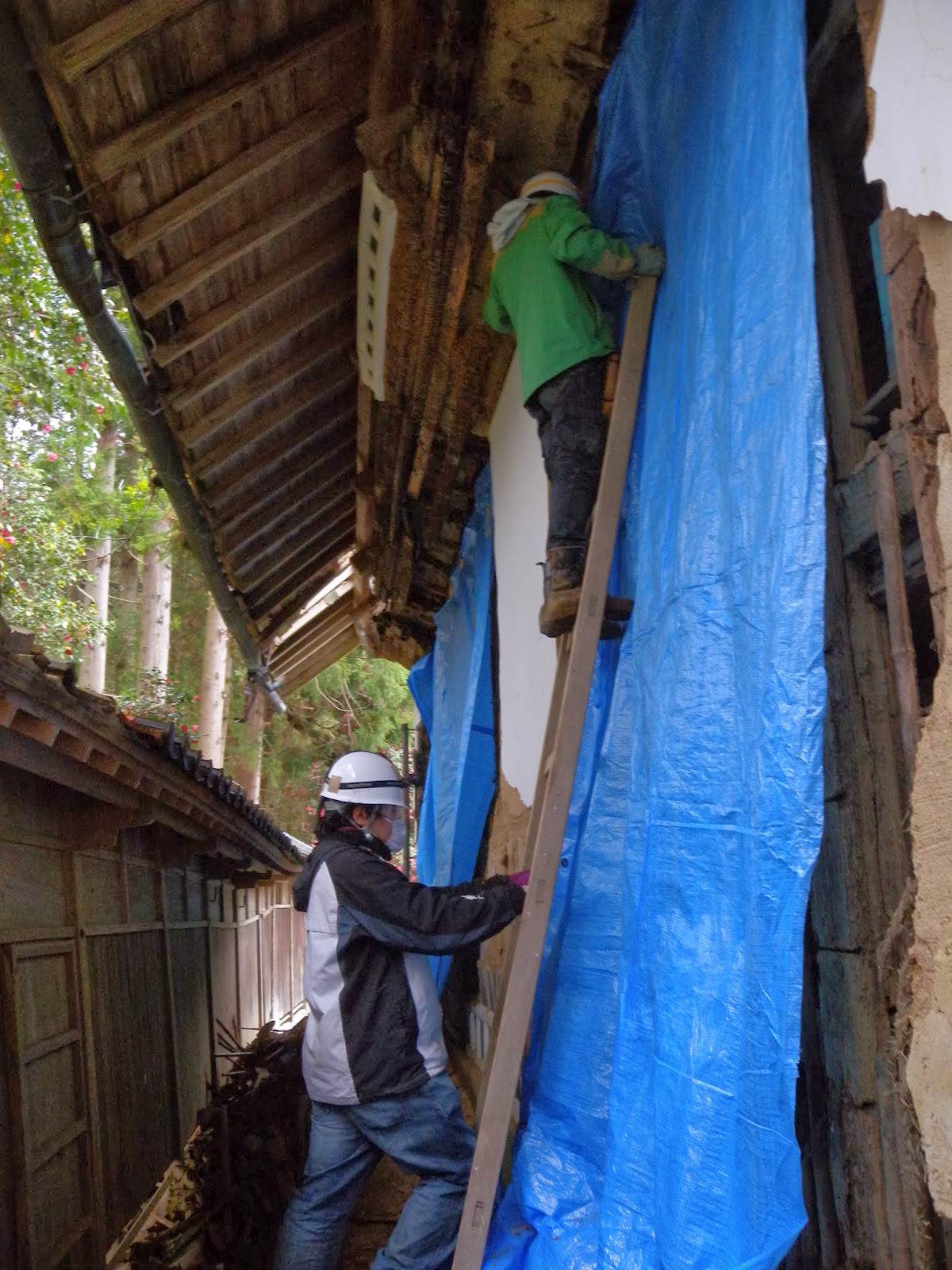 Covering the wall of warehouse where the protective outer layer of stucco has fallen off with a large vinyl sheet. This will save the dub-mud-and-wicker inner wall from further disintegration due to exposure to heavy rain (Kesen'numa, 1st May, 2011) 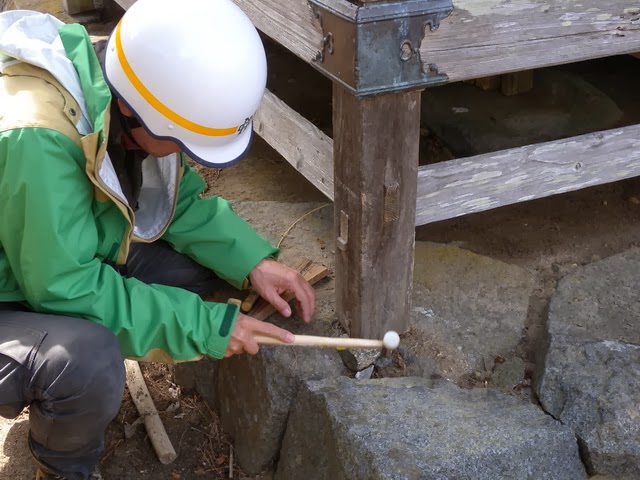 Putting together emergency foundation stones for an Edo Period (1600-1868) building. The original foundations stones were washed away by the tsunami (Ōfunato City, Iwate Prefecture, 1st May 2011) 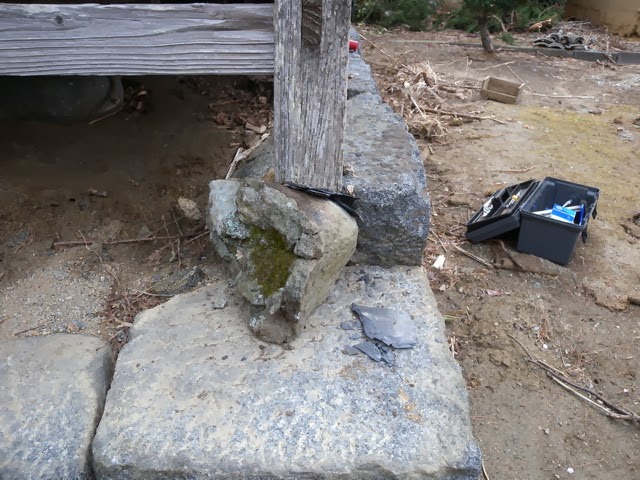 More emergency repair work to provide a temporary foundation for an old building. In this case, slate and old stones were used (Ōfunato City, Iwate Prefecture, 1st may 2011). 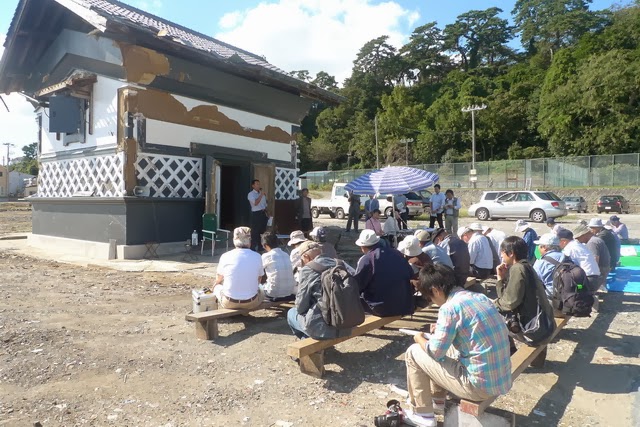 We carry out an onsite briefing at the Honma Family warehouse, Ishinomaki (November, 2011). The warehouse has come to embraced by the local residents (町内会） as a symbol to focus the community as they set about rebuilding their neighbourhood.